This was the most scariest thing I have ever had to go through with my daughters. 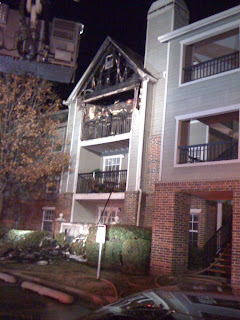 My youngest, Cassi, calls me at 11:30 on Friday night hysterical. All I could understand was "fire". I finally got enough out of what she was saying to get "apartment", "fire". At that time I said, "Me and dad are on the way!"

We jump in the car, I call Amanda as I know she can get to Cassi faster than I can and then I call Cassi back. At this time she tells me her dog Rhett is still in the apartment and the firemen were trying to find him. I just talk to her to try to get her to calm down because she is almost 5 months pregnant and this was the last thing she needed to be doing. 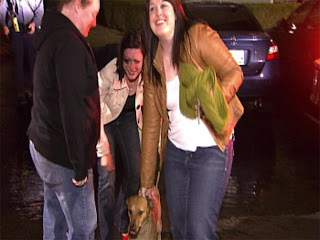 About 10 minutes later once we reached Tulsa, Amanda calls to tell me they had gotten Rhett out and he was okay. Scared, wet and smelling of smoke, but okay. At this time is when I felt my heart calm down and my body stop shaking.

In this picture you can see both of my daughters, Amanda in the grown jacket, Cassi bending over the dog in the white coat. Cassi's nose is bright red from crying so much but they were both so happy to get Rhett out and Rhett was so happy to see his momma.

Today was spent trying to salvage what we could and get them moved into another apartment. They lost a lot of things but those things can be replaced. Before leaving Cassi and Buddy's (her boyfriend) apartment I had them a bed made with clean sheets, 4 fluffy pillows and a nice warm quilt. I know over the next several weeks they will discover things that we were not able to get out but they are both just thankful that some of the high dollar items were salvagable and working when we plugged them in at the new apartment. I know I will be washing about 100 loads of laundry for them as they have other things to worry about right now than getting summer clothes clean or things that they just hardly ever wear but feel they have to have. Tomorrow will be spent taking Cassi to buy some new shoes as she lost all of them in the fire.
I know by now everyone is asking how it started and the fire department is still trying to figure that out. They have determined it started on their balcony outside but by what they don't know yet. They were not home at the time but like Cassi said driving up to your apartment on fire about 5 minutes after the firemen arrive is not the best thing to come home to.

I am just thankful my daughter is fine, my grand-puppy is fine and the baby she is carrying is fine too. It could have been worse because she almost did not go with Buddy and his friends and she would have been home when this started and probably have been in bed asleep at the time.
Wow! Wish this was really a dream and I would wake up to everything being okay but I smell like smoke and I'm pretty sure this is not a dream.
Posted by Unknown at 9:50 PM

OHHH I completly understand the panic, and my mom would even more. About 4 years ago i called my mom at 6:30 AM telling her that my apt building is on fire. So glad every body is safe and sound.