Well tax time has past but it left me depressed at how much we owe the IRS!!! Sometimes working from home is not the way to go even though I don't think I would change it. I just think hubby needs to think long and hard about some cows as a tax deduction but I think he knows when babies are born I would get attached and tax deductions would become pets!! :)

Since the IRS now gets a good chunk of money from us, I decided to get some of those quilt kits I have bought over the years out and start sewing on them. I knew they would come in handy at some point because I have no money because of the IRS! 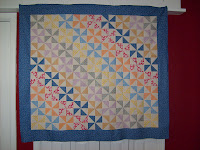 Now on to the kit I bought about a year ago at a quilt show. It is a wallhanging done in batiks, which are my favorite!!! I could start on the queen size kit I have that I bought while on a shop hop with a friend and she bought one too. I often wonder if she has hers put together or has even started it. :) I think she reads this blog so she might answer that for me. :) I think she got hers cut out but I never heard if she got it together. I might start on that one instead of the wallhanging. But then I also have another wallhanging of an appliqued horse's head that I could start on too. And those are not the only three I have, I have a few more that are started but I never finished that I could finish. And then there is the Dear Jane book I got recently BEFORE the IRS made be depressed!! I could start on that!! Dang it! I hate choices like this!!! LOL

Hope everyone is having a wonderful weekend!
Ang
Posted by Unknown at 4:31 PM

The quilt top is cute. Thank goodness we have our 'stashes' to get by (I call my spare bedroom my quilt store)....do you have the fabric for the Dear Jane?

The baby quilt is very cute.

So, you are going to make a Dear Jane. I'm making a block a week (by hand) and loving it. What style of fabric are you thinking of using?