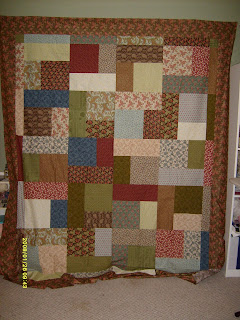 While at a quilt shop with my oldest daughter, Amanda, who is not a quilt nut like her mom, she saw this quilt on display and fell in love. They had the kit but I told her I didn't have time to make it or the money for the kit right then. :D That next week since she does not live at home I called the quilt shop and sure enough they still had the one kit left that had the fabrics/colors that she liked so I bought it over the phone. I had hubby go by and pick it up. So while hubby went to the Texas NASCAR race with my younger brother, I made the quilt top and it goes to the quilter next week to get machine quilted before Christmas. 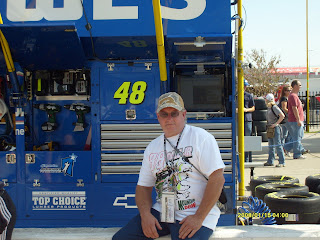 I just love this picture because he took the digital camera and took over 150 pictures of pit wagons which is what he is sitting in front of here. This was in the pits and he had a blast even though he doesn't look all that thrilled to be there. LOL He is the type of person that doesn't show on the outside how excited he is on the inside. I would just love one day to see him get so excited that he started jumping up and down and running in circles. He would have us all in shock! LOL But the weekend was a great one for both of us as we both got to do one thing we love... me sew, him watch a NASCAR race in person plus visit the pits.
Posted by Unknown at 6:21 PM